Pheromone traps set strategically throughout Maine during the moth flight season (June-August) are designed to lure, trap and kill budworms. The traps are collected in late August and turned into the Maine Forest Service for evaluation of SBW populations. The MFS produces the following maps based on those trap collections.

2019 Update from the Maine Forest Service: The Maine Forest Service (MFS) and its cooperators are closely watching spruce budworm in Maine to monitor and prepare for another epidemic of this native defoliator. Over the last several years, Spruce budworm populations in Maine have left the “stable” phase and appear to be building. Pheromone and light trap catches have been up above zero for a number of years, defoliation in Quebec has increased year after year, defoliation has been mapped in New Brunswick. This is an insect whose epidemics cover vast regions and flights of moths from heavily infested areas can migrate to new areas. That there will be another outbreak in Maine, soon, is undeniable. When, where, how severe, and what the specific impacts and reactions may be remain to be seen. MFS full report can be found here. 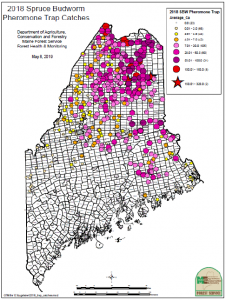