At its peak, the last SBW outbreak, which lasted from 1967 to 1993, covered about 136 million acres across eastern Canada and Maine. The outbreak was severe and produced dead and dying stands of trees that could be seen to the horizons in some areas. This outbreak defoliated fir and spruce trees across most of the northern half of Maine, killed between 20 and 25 million cords of spruce and fir, and resulted in hundreds of millions of dollars in lost revenue to the state’s forest-based economy. Efforts to protect the forest during this period launched a wave of aerial insecticide spraying across millions of acres, with the area sprayed exceeding a million acres per year at peak times during the outbreak. These protection efforts cost state and federal governments, as well as private landowners, many additional millions of dollars and 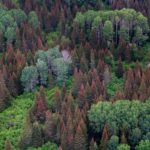 resulted in conflicts over how the costs would be shared. In addition to these immediate impacts, the SBW outbreak drastically changed forest structure and composition across northern Maine and had ripple effects on forest management, politics, public policy, and the forest-based economy over the next 40 years. For example, salvage logging to capture dead and dying trees caused landowners to increase the use of clearcut harvesting during the 1970s. These clearcuts had a large visual impact on the forest landscape, which caused substantial public controversy. This controversy led to passage of the 1989 Forest Practices Act (FPA), which defined and heavily regulated clearcut harvesting. Efforts by landowners to reduce the use of clearcutting after
implementation of the FPA were very successful. Clearcutting as a proportion of forest harvesting fell from 45% in 1989 to less than 8% by 1996, and has hovered between 2% and 6% every year since that time.

By 1975, not only Maine, but “the entire region from Ontario to Newfoundland was involved in the largest spruce budworm outbreak ever recorded.” Television news clips from the era speak eloquently to the issues that faced the industry, government, and  public. The forests were full of over-mature fir, which set the stage for the “Battle of the Budworm” that Seven Island’s forester Bill Brown and his cohorts remember so vividly in the video, “Lessons Learned: Memories of the Maine Budworm Infestation.”