How Does This Affect Me?

The last SBW outbreak during the 1970s–80s grew quickly, killed millions of acres of spruce-fir stands, and cost the region’s economy many hundreds of millions of dollars. Despite being a natural part of the forest, the SBW can be devastating to the health of spruce-fir stands as well as to the wildlife and people that depend on them.

The current outbreak began in Quebec around 2006 and to date has caused severe defoliation of more than 15 million acres of spruce-fir forest.  Although it is not possible to predict exactly when defoliation of balsam fir and spruce will begin, how severe the next outbreak will eventually become, or how long it will last, it is vital that Maine’s forestland owners and stewards begin preparing before widespread defoliation begins. 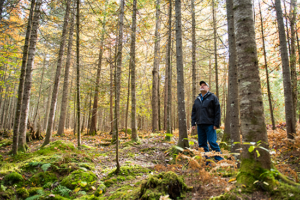 In 2015, the Maine SBW Task Force gathered information from more than 65 experts on various aspects of the issue in order to form an initial risk assessment for the coming outbreak and d to provide key recommendations for how Maine’s forestry community can begin preparing for and responding to the coming outbreak. Their final report is available for download: Coming Spruce Budworm Outbreak: Initial Risk Assessment and Preparation & Response Recommendations for Maine’s Forestry  Community.

The information found in the pages of How Does This Affect Me are meant to provide details to Maine’s forestry community–including landowners, educators, visitors, state and federal officials, wildlife biologists and forest researchers, and the media, among others–about the current status  of the coming budworm outbreak and how they can begin to prepare for and respond to the outbreak. As the outbreak unfolds, it will be necessary to reassess and re-adapt response strategies that make biological and economical sense, and to keep all interested parties informed.