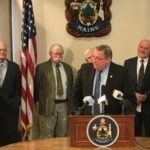 “We are on the verge of another spruce budworm epidemic and our goal is to lessen its damage,” Gov. Paul LePage said at a news conference in the Cabinet room.

The eastern spruce budworm is believed to be the most damaging forest insect in Maine and North America. Outbreaks kill balsam fir and spruce trees every 30 to 60 years. The Province of Quebec has been mapping defoliation from this pest for more than a decade. In 2015, 15.6 million acres of Quebec’s forests were defoliated. Significant defoliation occurred south of the St. Lawrence Seaway. The infestation already has spread into New Brunswick.

“Severe defoliation is within 50 miles of Maine’s border,” said Dave Struble, state entomologist. “We are at the start of an outbreak. We don’t know how bad it will be or exactly where, but we are seeing a build-up of budworm populations here.”

“It’s like having a hurricane moving toward us from offshore,” Wagner said. “We know it is there, how it behaves and the kind of damage it can do. We can hope that it misses us, but if we don’t prepare for the worst, shame on us.”

The report includes about 70 recommendations on preparing for the outbreak, including increasing monitoring efforts, applying pesticides where appropriate, changing forest management strategies such as harvesting, and seeking ways to pre-salvage trees that likely would be lost.

“The budworm threat remains the same, but a lot of other things have changed,” Strauch said. “Our industry is governed by the Forest Practices Act now; pesticides are highly regulated and far more expensive, and there’s much less state and federal funding available. So the landowner community will need to figure out the best path forward. This report provides a framework to help landowners make good decisions.”

Denico, who has vivid memories of the last infestation, said he and other members of the task force are determined that this outbreak won’t take the state by surprise as the last one did. By 1975, not only Maine, but “the entire region from Ontario to Newfoundland was involved in the largest spruce budworm outbreak ever recorded.” (The Spruce Budworm Outbreak in Maine in the 1970’s).

In Maine, budworm destroyed up to 25 million cords of spruce-fir wood — 21 percent of all fir trees in the state, according to Maine Forest Service reports. Millions of dollars were spent on the “Battle of the Budworm,” as it was called, and the infestation cost the state’s forest-based economy hundreds of millions. It also had lasting effects on Maine forest management.

“We were there, in the battle,” Denico said. “We remember and we’ve made a commitment that we won’t be unprepared this time.”